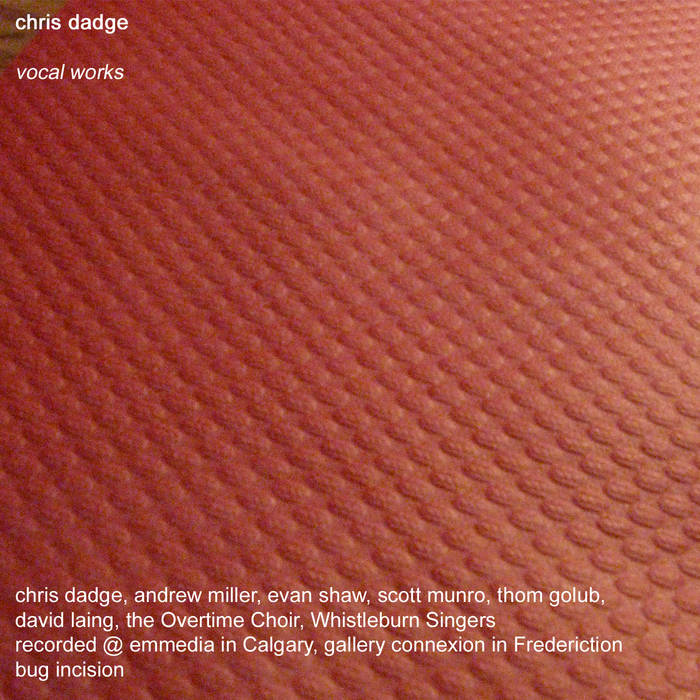 'Vocal Works' is the collected recorded works of Chris Dadge's investigations into the possibilities offered by the combination of a small ensemble, a choir, and a loose framework through which to improvise. The inspiration for the pieces came through an evening of listening to the wonderful Globe Unity Orchestra recording "Hamburg '74", which features a German radio choir as the group's accompanists.

The first piece (which is untitled) was written and recorded in August of 2008 for the first and only Bug Incision End of August Festival. The instrumental ensemble is comprised of the Bent Spoon Trio (Chris Dadge on percussion, David Laing on tenor sax - worth noting because this was one of the last improv-based appearances by Laing, who on this night had FORGOTTEN his alto sax, and was forced at the last minute to borrow Dan Meichel's tenor, as Dan was also performing at the festival - and Scott Munro on upright bass) along with Edmonton's Thom Golub on second upright bass. The Whistleburn Singers were comprised of Dan Meichel, Mark Dicey, Mike Wallace, Dolly Silitto, Clea Foofat, Lyle Pisio, Peter Moller, Megan Hodgkinson, Jeff McGregor, Sandy Barron, Scott Moffat, Jamie Cullen, Shawn Dicey, Kirsten Elliott, Eric Hamelin, and was conducted by Jay Crocker. It was recorded August 28, 2008 at Emmedia, in Calgary, AB.

The second piece is a revised version of the first, and is entitled 'We Have A Lane For You'. In late 2010, Dadge did a small tour of the eastern part of Canada, and had a chance to work with Joel Leblanc and his choir in Fredericton. The ensemble for this piece was comprised of Chris Dadge on percussion, Andrew Miller on upright bass and electronics, and Evan Shaw on alto sax. The Overtime Choir was represented by a currently unknown list of participants, and was directed by Joel Leblanc. It was recorded November 27, 2010 at Gallery Connexion in Frederiction, NB.