A New Kind of Ray 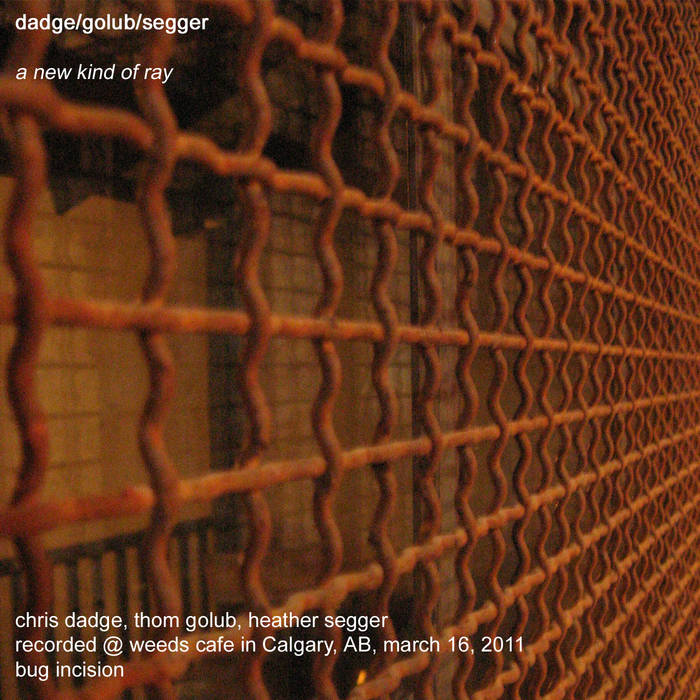 This set was recorded at the monthly Bug Incision concert series, which takes place at the wonderful Weeds Cafe in Calgary.

Dadge and Golub have been associating with one another since the mid-2000s, first appearing together in an Ornette Coleman tribute concert, and after that, the two joined forces with Shane Krause in 2006, and started the trio Hidden Fortress. That group toured and recorded in 2007 and released four albums, mixing free jazz/blowing-session-style compositions, graphically notated pieces, and free improvisation. Golub is one of the most prominent players in the Edmonton scene, having been at the heart of TIN (The Improvisor's Network), and lives and works there currently.

Heather Segger is an ex-Edmontonian, now living in Toronto. She and Dadge first met at the Tequila Bookworm, a small club in Toronto, where her duo with husband Mark Segger was playing opposite a trio of David Payne (of Fossils), Simeon Abbott, and Dadge. To finish the evening that night, they played as a quintet, and this stuff was eventually released in chunks by Payne on his Middle James Co. label, as 'Deep Sea Fossils'. In March, Segger was touring western Canada as part of Mark's group, and had a few extra days to kill. Knowing Golub from her time in Edmonton, it seemed logical to get all three together for a nice set of free improvising.

The set is a loose & limber waltz through various modes of improvising, ranging from free jazz-style proclamations, to the minute hustle & bustle of small sounds and gestures derived from the group's love of the '70s British school of 'non-idiomatic improvisation' (thanks, Derek!). Thanks to all who came out and all who played on this night.